Answers to the Questions in the 'Visualising DNA, RNA & Proteins in Jalview School' Workbook

Exercise 1: What is DNA?

Q1: What are the names of the 4 different DNA bases, and their single letters identifier?

Q2. How many nucleotide base pairs are there in this fragment of DNA?

Tip: count the base pairs in the 3D structure window, whilst you hover the mouse cursor over the bases in one of the sequences in the alignment window.

Q3. From step 9, are the DNA strands parallel or anti-parallel?

Q4. Look at the shape of the purines and pyrimidines in the structure viewer, how are they different to each other?

Purines and pyrimidines are nitrogenous bases.

Q5. In Step 11, what direction is the strand turning, clockwise or anticlockwise?

The B-form double helix of DNA, as proposed by Watson and Crick, rotates clockwise (right-handed).

Exercise 2: What are codons?

Q6. When an amino acid residue is selected in the protein sequence, why are three nucleotide bases highlighted by a black box in the DNA coding sequence panel?

Q7. What DNA triplet bases are associated with leucine at residue 3, 10 and 12?

Q8. Would you expect them to be the same?

No, as there are 6 different triplet combinations that code for leucine (tta,ttg, ctt, ctc, cta, ctg)

Exercise 3: What is RNA?

Q9: What are the names of the four different RNA bases?

Q10. How does RNA and its nucleotides differ from those of DNA?

Q11. How many amino acid residues are there in the human myoglobin protein?

Tip: Either scroll to the end of the sequence, place the mouse cursor on the last residue leucine (L) and look at the status box in the bottom left-hand corner of the alignment window.

Q12. How many alpha-helix regions are there in the structure?

Q13. Which animal has the most similar sequence compared to the human myoglobin?

The gorilla as they share the same branch in the tree. Looking at the sequences in the alignment window, they are the same except at residue 23 where there is a proline in human myoglobin and serine in gorilla myoglobin.

Q14. Looking at the tree window, are the groupings what you might expect?

Q15: From the tree which animal has the most similar myoglobin to humans?

The gorilla when you review the sequences in the alignment window, they are the same except at residue 23 where there is proline in humans and serine in gorillas.

Q16: From the tree, compared to humans which animal has the least similar myoglobin?

Exercise 6: Viewing a range of proteins with different biological functions

Q17. How many different protein amino acids are found in nature?

Proteins found in the human body are constructed from a set of 20 amino acids.

Although there are hundreds of amino acids found in nature, only 20 are present in naturally occurring proteins.

Q18. What is the name of the amino acid that is represented by the letter A?

Q19. What is the chemical formula of the amino acid glycine (G)?

Exercise 7: What are exons & introns?

Q20. How many exons are in the HBB gene?

The exons are coloured cyan. Probably the easiest way is to count the cyan bands in the overview window.

Each exon is numbered, and this information can be seen by hovering the mouse cursor over the exons in the alignment and a yellow tooltip opens.

Q21. What is the main difference between exons and introns?

Genes are made up of protein-coding regions called exons, separated by regions called introns. Introns do not encode proteins but appear to play a role in regulation and gene expression.

Exercise 8: Viewing the coding DNA of the HBB gene & its protein product

Q23. In the mutated HBB protein, what amino acid replaces the glutamic acid at residue 7?

Placing the mouse cursor on residue 7 in the alignment opens a yellow tooltip that contains this information.

Q24. Does every person with this HBB gene mutation get sickle cell anaemia?

Sickle cell disease is caused by a mutation in the haemoglobin-beta gene found on chromosome 11. The disease is autosomal recessive which means that only people with 2 copies of the sickle cell gene, one on each chromosome 11, have the condition.

Q25. What happens to the red blood cells of people with sickle cell anaemia?

Under low oxygen conditions, the haemoglobin with homozygote mutations has a tendency to form polymers, this process is called sickling. These polymer filaments distort the cell into the characteristic crescent shape. I recommend this video on the subject: 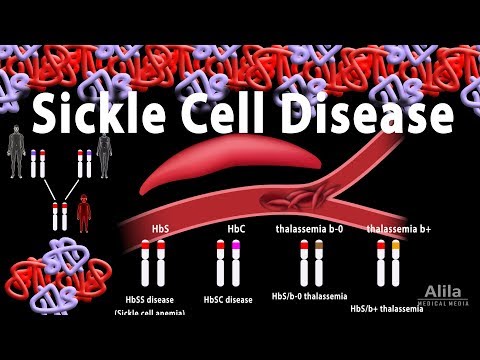 Q26. What evolutionary advantage does heterozygote sickle cell mutation (only 1 of the HHB genes have the mutation) infers on people in countries such as Africa?

Individuals with the heterozygote sickle cell mutation in areas with persistent malaria outbreaks appear to have a distinct advantage. This is why individuals with heterozygous alleles are far more common in these areas.